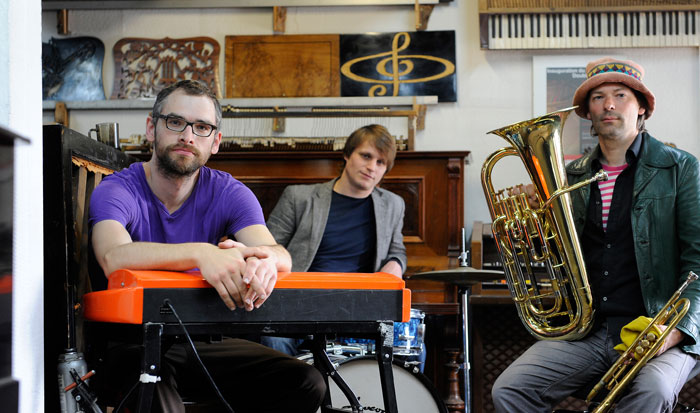 Playing outside the box: The Cnirbs jazz trio from Hamburg tour Africa

It was probably raining when these three jazz men got together in Hamburg to form Cnirbs (Knirps, by the way, means whippersnapper or manikin in German and is also a brand name for a very popular telescopic umbrella). The damp weather certainly didn’t put a damper on their music, though. Quite the contrary, for this trio are out to “make a contribution to the musical amusement of humanity”.

The members of the Cnirbs jazz trio are keyboardist and composer Matthäus Winnitzki, drummer Konrad Ullrich and trumpet and euphonium player Stephan Meinberg.

Playing outside the box

Although consummately trained on their respective instruments, the three “Cnirbse” routinely push the boundaries of jazz with their wild rhythms, undertaking brief musical forays into related genres. You can hear borrowings from alternative rock in their music as well as electronic elements and influences from African and Caribbean music. As a matter of fact, composer Matthäus doesn’t see himself as just a jazz musician, but more as a “world musician”. Born in the late 1970s in the Polish city of Tychy, he moved with his parents to Hamburg, where he studied classical and jazz piano. In addition to Cnirbs, he leads a Latin jazz band called Sonora 51 and is a sideman in a great many other ensembles.

Konrad Ullrich came to Hamburg from Neubrandenburg in Mecklenburg-Western Pomerania. He discovered his passion for the drums at the early age of ten and took lessons from then on. He played in the big band at music school, where he discovered his second love: jazz. After high school he went straight on to the conservatory in Hamburg, where he was trained by some renowned teachers. On the side he played in the Bundesjugendorchester (German Youth Orchestra) before going to New York in 2006 on a jazz scholarship. Ullrich is at home in the Berlin and Hamburg jazz scenes, and from time to time gives concerts abroad, as on his current tour with Cnirbs.

Which leads us to trumpeter Stephan Meinberg, the third man. Meinberg also plays euphonium – another brass instrument, which has a somewhat deeper register than the trumpet and is often used in brass bands and orchestras. Stephan first studied European classical music in Lübeck, then jazz in Cologne, before likewise flying over to New York for a year on a scholarship. Upon his return to Germany, he played with countless musicians and with the NDR (North German Broadcasting) big band. He has already released a number of CDs with his ViTAMiNE quintet and the bands Arnie Bolden, moLd and HEELIUM.

With their wild improvisations and complex rhythms, Cnirbs never neglect to have some fun when playing live gigs. With their keyboard, brass and percussion instruments, a panoply of wires, flashing little lights and mysterious foot pedals, with their verve and painstakingly-achieved lightness of touch and sound, Cnirbs have already played a number of jazz clubs and festivals, delighting old and new fans alike. Now they’re off on a tour of seven different African countries with their new record Hey Kollege and looking forward to garnering interesting impressions, new encounters and perhaps a new fan or two.