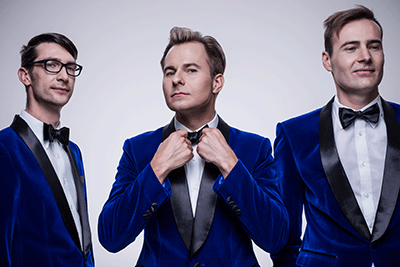 Charl du Plessis
The South African press has hailed Charl du Plessis as a “cult pianist” an “edu-tainer” and a pianist with “x-factor in his playing”. He is a versatile performer who brings insight into the vast range of music he plays through his own search for truth and beauty. Being the only pianist of his kind performing simultaneously in music ranging from baroque to pop he has become renowned for his interpretations of classical and jazz piano repertoire, both in the concert hall and as a recording artist. He is known as South Africa’s Piano Man and is the youngest person ever in Africa to be named a Steinway Artist. He has released four albums and one DVD.

Charl du Plessis is a doctor of music and a lecturer of both classical and jazz piano at the University of Pretoria and the official accompanist for Nataniël.

He has performed in China, Japan, Switzerland, London, North America and the Netherlands as well as across Southern Africa.

Future highlights of this season included concerto performances with the Johannesburg and Cape Town Philharmonic Orchestras and Pretoria Symphony Orchestra as well as the first live DVD recording of his hit show Pimp My Piano.

Werner Spies
Werner completed his B.Tech: Music degree at the Tshwane University of Technology in 2007 and plays double bass and bass guitar. He is a sought after free-lance musician, working with the likes of Nataniël, Charl du Plessis, the Phat Brass Big Band, Jannie du Toit & Christa Steyn (Belgium tour 2008), Anna Davel, Albert Frost, Jak de Priester, Frank Opperman and the Radio Kalahari Orkes and can be heard on albums of various prominent South African artists. Recent highlights include the Ghoema Award winning and SAMA nominated album Shanghai Brunch by the Charl du Plessis Trio, as well as performing on the upcoming “Pretville” movie soundtrack.
When not performing Werner runs his own music agency, Music Mosaics (www.musicmosaics.co.za), providing music for corporate events, private parties and weddings and he is a part-time lecturer at the Tshwane University of Technology, Hatfield Christian Church and St. Johns College in Johannesburg.
The Music Connection in Johannesburg with MarkBass Amps endorses Werner.
Werner also co-owns Haloa Coffee, a new café at the University of Pretoria.

Hugo Radyn
After studying music at the Tshwane University of Technology Hugo has performed and recorded with various South African artists such as Nataniël, Jak de priester, Rocco de Villiers, Anna Davel, Andre Swartz, Cassette and Gang of Instrumentals.
He is also part of the Charl du Plessis Trio which toures China, Switzerland and the Netherlands on a regular basis. He is one of the founding members of the band Float Parade who have recently returned from a successful tour of the United States of America.
Hugo is a part time lecturer at the University of Pretoria and one of the most sought after drummers and recording artists in South Africa.