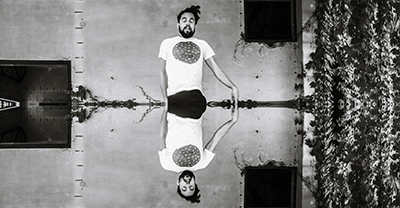 Bowrain (1983, Ljubljana) is a contemporary composer, pianist, and producer. In 2014 he released his debut album Far Out, which he recorded in Amsterdam. The release of the album was held in Amsterdam’s Sugarfactory, followed by numerous performances as a support to main acts such as LAMB, Garden City Movement, Fennesz, Perera Elsewhere, Arms and Sleepers. To date, he has released several singles, one album, and one EP. His previous studio recordings used to be entirely individual, however, the recent album DISTRACTED is a collaboration with Ljubljana based guitarist and producer Mario Babojelić – UM and German drummer Robert Nitschke.

“Piano is my tool, my instrument. There is a reciprocal familiarity that happens when I dive into it. Playing piano for me is more natural than speaking.”