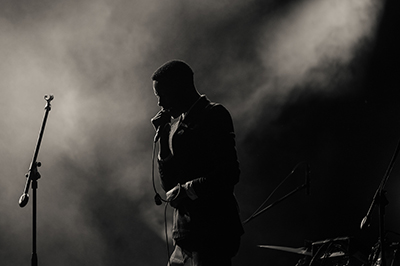 When Bongeziwe Mabandla surfaced with his debut album in 2012 he was hailed as the new face of Afro-Folk, effortlessly able to entwine Xhosa lyrics with traditional music and folk stylings to create something uniquely captivating.

In the five years that have passed since Umlilo ’s release, Mabandla has amplified his already considerable gifts and is now capable of
joining Africa’s most highly regarded musical exports in creating a global audience for the music he makes.

That the Eastern Cape artist can move into territory occupied by Africa’s most gifted singer-songwriters (Baaba Maal; Ismaël Lô for
instance) is visible in his second album, Mangaliso – his first through a new deal with Universal Music. The 10-track record is a sumptuous listen that spotlights Mabandla’s artistic growth into one of the most purposeful and gifted artists working in South Africa today.

Since its release in May, Mangaliso has been singled out as one of the most important African releases of 2017 with The Fuss describing it as a “unique piece of work”, with music that “ebbs and flows with spiritually” and Between 10and5 noting his “folk sound resonates on a spiritual level and its rhythms combined with his lyrical storytelling invite the hearer to a deeper listening”.

Mabandla’s live shows have also earned him critical and popular acclaim over the past six months. Recent performances at Oppikoppi
Festival and Rocking The Daisies drew large and devoted audiences with Mabandla being named as one of the most outstanding acts at both of South Africa’s biggest and most important music festivals. His performance at the Lyric Theatre in Johannesburg in September similarly affirmed his standing as amongst the country’s most compelling live artists – someone whose shows deliver a near-ecstatic experience for audience members.

The first single off Mangaliso is “Ndokulandela”, a hypnotic song that showcases Mabandla’s meditative, yet powerful, voice – and provides an easy way in to what is likely to be one of 2017’s most acclaimed releases. And there are plenty more songs on the new album that more than prove the flurry of praise and accolades (including two South African Music Awards nominations) that surrounded Umlilo’s release were deserved. The album’s closing track “Bawo Wam”, for instance, carries with it spirit of the ancient in a song built around a distinctively modern beat-heavy groove and “Khaya” is evidence enough that Mabandla’s guitarwork is amongst the most lyrical South Africa has produced.

For the artist, Mangaliso’ s dual meaning – “marvel” or “miracle” – is indicative of the highs and lows of his journey since the release of
Umlilo.

“The period between Umlilo and this album was not always easy,” explains the artist. “But it meant I had to do a lot of growing up and I
think that is reflected in the new material. In a way, I feel like I am starting again so Mangaliso carries the energy of something totally
new and invigorating.”

In creating his second album, Mabandla initially fell back on the songwriting approach that had seen him through his debut. “But the
team around me pushed me hard to create music that was beyond a South African sound. By that I mean, to create a sound that was less instantly recognisable as South African, even though it’s always going to have its deepest roots here, and instead one that carries with it an international quality that can transcend borders and genres.”

In this journey, Mabandla was joined by Tiago Correia Paulo, formerly of Tumi and the Volume and 340ml, and among Southern
Africa’s most adventurous producers. “There were times when we were in the studio and Tiago had me kneeling and singing, as a way of enhancing the emotion that my new music is filled with,” says Mabandla of the recording process. “Tiago’s incredibly
forward-thinking and working with him felt instinctive and very special from the word go.”

The majority of Mangaliso’s were tracked in Cape Town by Beatenberg’s Ross Dorkin and the album also features Robin Brink
from Beatenberg on drums as well as a guest vocal by Spoek Mathambo. “I really love Spoek’s work,” says Mabandla of the
collaboration.

Lyrically, Mangaliso reflects the binary world that Mabandla inhabits. “It’s about my hopes and my regrets, about the darkness and the light and about life and death and our very existence,” he says. “Although elements of the album are very contemporary, there is a quality to the songs and music that captures the deep spirituality that has always been in African culture.”

Playing live in support of Mangaliso , Mabandla is joined by Correia-Paolo on guitar and samples and Mike Wright (Zebra &
Giraffe) on drums. Watching the trio perform is nothing short of captivating and it’s no surprise to find that Mabandla’s South African
and international bookings are gathering pace. Already he’s travelled extensively over the past few years, playing Primavera Sound in
Barcelona and Africa Festival in Germany. Mabandla has also toured Australia, Asia and Canada, substantially expanding his audience
through a series of critically-acclaimed live performances. “I am incredibly grateful to be doing what I love, and travelling the
world while I do it,” says Mabandla.

“Touring internationally opened my eyes to how popular folk-based music is, and although my new music is more artistically
experimental than anything I’ve done before, it remains located in this age-old idiom. Performing globally over the past few years has
also showed me that my music can travel and I can’t wait to bring my new songs to audiences in South Africa and beyond.”

● Born in Tsolo, a rural town in the Eastern Cape, Bongeziwe Mabandla displayed all the signs of a passion for art and music
from an early age. After studying drama at AFDA, a film television and performance school in Johannesburg, Mabandla dedicated his
time to songwriting and performing shows, developing his own unique unplugged style and earning recognition as a musician. His
2012 debut Umlilo included collaborations with Nosisi (former Kwani Experience vocalist), and Zuluboy. The album earned two
South African Music Awards nominations in 2013, for Best Newcomer and Best Adult African album. Among the artists
Mabandla has performed with are Joss Stone and Vieux Farka Toure’ and he’s played all major local festivals in his home
country.