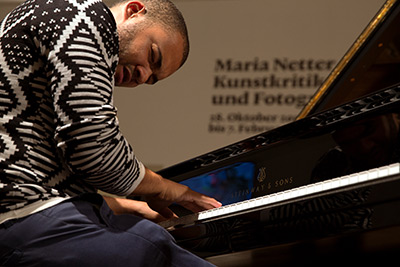 Bokani Dyer was born on the 21st January, 1986 in Gaborone, Botswana. An auspicious setting in retrospect, where many exiled musicians and artists from South Africa, including Bokani’s father, musician Steve Dyer, were living in exile.

Having musicians around in his early life gave Bokani the profound insight into the life of a musician and sparked a keen interest in pursuing music as a career. After taking up formal piano studies at age 14 for 4 years, he was accepted into the Jazz program at the University of Cape Town where he graduated in 2008 with an Honours degree in Performance and Composition with distinction.

In 2009 Bokani won a scholarship for further study in the SAMRO endowment piano competition. He chose to spend 3 weeks in New York where he was tutored by Jason Moran. In 2011, Bokani Dyer was awarded the prestigious Standard Bank young Artist award for Jazz, bestowed upon visionary artists like Mark Fransman, Andile Yenana and Kesivan Naidoo in past years.

Dyer has recorded two albums under his own name. His debut album, Mirrors was released in 2010, and provides a strong indication of the style and artistic trajectory Bokani continues to pursue.   Emancipate the Story (2011), is a recording made possible by  the Standard Bank as part of the jazz young artist award.

In August 2013, he was awarded first prize in the SAMRO Overseas Scholarship after competing in the annual competition. He toured Europe with his quintet in May 2014 visiting Switzerland, Germany, Czech Republic and the UK. As a result of the tour, he was invited to perform at the London Jazz Festival in November 2014.

Most recently, The Bokani Dyer Swiss Quintet embarked on a 10-show tour of South Africa and Mozambique, performing in Grahamstown, King William’s Town, Johannesburg, Maputo and Cape Town.  The tour was a success and promises to be a fruitful collaboration with the Swiss musicians.

“His is a strong, individual sound and an emblem of the rise of a new wave of contemporary jazz voices”
Mail & Guardian

“His compositions were strong, and his ability to navigate changing moods and to lead the group were engaging”
London Jazz News