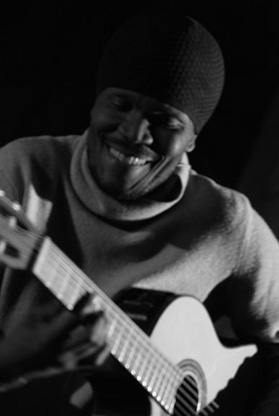 Bhekisisa Khosa is the well-known left handed guitarist from Umlazi, Durban, South Africa. In 1991 he received a Talent Award and scholarship to study music in America. He returned in 1995 from studying at the University of Hartford, Connecticut, with the great Jackie McClean, on of the few living legends.

While in America, Bheki was resident with Larry Ridley’s jazz legacy playing the whole spectrum of African American music. The band was headed by Larry Ridley himself, who played with Wes Montgomery, Sonny Rollin, Miles Davis, Horace Silver, Kenny Burell, George Benson, Dexter Gordon and far too many other musicians great to mention.
by the time Bheki left America he was already making a name for himself playing clus like Blue Note, Saint Mark’s Zinno’s and Smalls, a famous club often referred to as :The Mecca of Jazz” which has jam sessions every night to all hours. Khoza also played at the famous Shamberg auditorium in Harlem.

Some of the musicians he held the opportunity to play with included Kenny Barron, Hilton Ruiz, Kirk Ligtsey, Cecil McBee, Virgil Jones, Charlces Davis and Steve Davis, who now Anarchy, a jam club for African music, in particular. Gigs stemming from the African connection included backing vocalist FLoxy Bee from Nigeria and Thuli Dumakude, a singer from South Africa, of Mabatha Fame.

Bheki musical influence are many. His grandmother played Jewish harp and harmonica, and enriched him with tradition of Zulu music which he then found in Phuz Shukela, Kati Elimnyama and Ngane Ziyamfiva. He was also influenced by people at wedding, funerals, in the street and shebeens. Other influences include Philip Thabane, Alan Kwela, Abdulah American Influences-Wes Montogomery, Barney Kessel, Kenny Burrell, Joe Pass, George Benson and Charlie Parker in later which Bheki also picked up.

During his early years in Durban, Bheki learnt to play solo due to the lack of full time musicians to accompany him. In spite of this, he has wide experience and interest in small group and big band music alike.

Bheki recorded an album entitles “Asambe” in 1995, which is often aired on Radio Metro and Safm. The album is comprised of original compositions, some of which used to be Shonilanga. Bheki also composed the African Jazz Pioneers hit “Sgaxa Mabhande”.

Bheki is musical director for the South African film production of “Drum”, a frictional account of the razing of Sophiatown. The film features a high profile international cast, a wide variety new musical production selections which defined the Sophiatown sound, and many of the surviving musicians who played in the bands of the time. The film is schedule for world premiere in the Spring of 2004.

Bheki is currently heading his own quarlet which focuses on his many original compositions, featuring drums, piano, bass, and guitar. He has released his debut album “Getting to Heaven Alive” end of 2006.