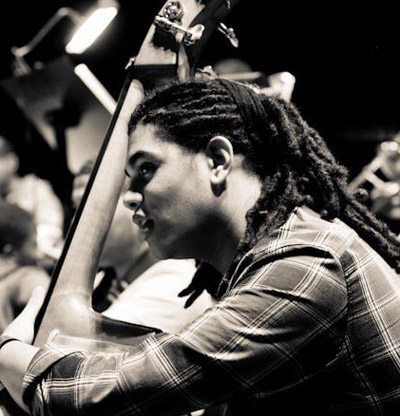 Cape Argus Bassist and composer, Benjamin Jephta, born in Cape Town, South Africa on 14 July 1992, has already made a name for himself as one of South Africa’s premier jazz double bass and electric bass players. Although he grew up in Mitchells Plain It was when he attended Muizenberg High School, that he grew a love for jazz under the mentorship of Fred Kuit (2012 SAJE lifetime achievement award in jazz education). Apart from performing in venues and festivals locally since the age of 16, Benjamin has also performed with various orchestras and small ensembles in France, Sweden, Shenzhen (China) and Tanzania. Jephta currently have two projects that play all his original material. The one band is a 6 piece African/fusion/funk band called the Tribe of Benjamin, who played at the 2011 Cape Town International Jazz
Festival. The other is an acoustic quartet that plays music based on gospel and South African music featuring Kyle Shepherd (2014 Standard Bank Young Artist)(piano), Buddy Wells (sax) and Marlon Witbooi (drums).

Some of the other musicians Jephta has performed with include Alvin Dyers, Errol Dyers, Late Robbie Jansen, Jimmy Dludlu, Camillo Lombard, Simphiwe Dana, Mcoy Mrubata, Mark Fransman, Paul Hanmer, Melanie Scholtz, Marcus Wyatt, Bokani Dyer and many others. Jephta is currently composing for his original projects as well as being involved in various other original projects ranging from playing double bass in a free jazz orchestra to synth-bass in a pop band.

“…bassist Benjamin Jephta decided he had to show the world there was more
to young musicians than mass marketing and hyped-up fake pop “icons”.”
Gary Van Dyk (Die Burger)

“His language is jazz, funk and fusion and at just 18 years old and in his
second year of music at UCT, he is hitting a new note on the jazz music
scene.” Tina George (Tonight, Cape Argus)