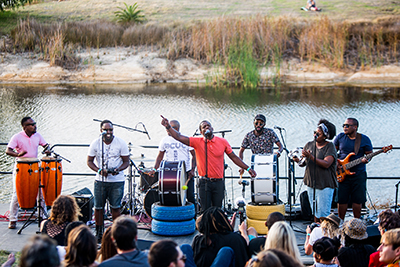 BCUC is a live music-performing band from Soweto, South Africa. Our music derives from a blend of genres across the ages. We draw inspiration from Indigenous music that is not exposed in the mainstream. We sing ritual songs, around the fire hood songs; shebeen songs, church songs and we infuse them with raps and a rock and roll attitude. We always aim for a timeless, honest and traditional/ ritualistic sound. The music should always resonate with the spirituality, the history and the future of the people.
The band is made out of 7 band members, Jovi (lead singer, percussions), Kgomotso (backing vocals, percussions), Hloni (raps, ad libs, percussions), Luja (raps, backing vocals, marching drum), Cheex (congas), Skhumbuzo (bass drum) and currently we are playing with a session bass guitarist, Mosebetsi.

As BCUC, we want to tell stories of where we are from, showing where we are and where we are headed. Our Indigenous Music is not trapped in the past. Instead our views embrace the now. We are influenced by what we see, hear and the global community. Bantu Music (Africa Ngungungu) is not constrained to where we are from instead it recognizes human connection regardless of geography, culture or social standing.
We are the now generation. We are relevant; we are “the man on the street’’.
It is music for the PEOPLE, by the PEOPLE, with the PEOPLE.