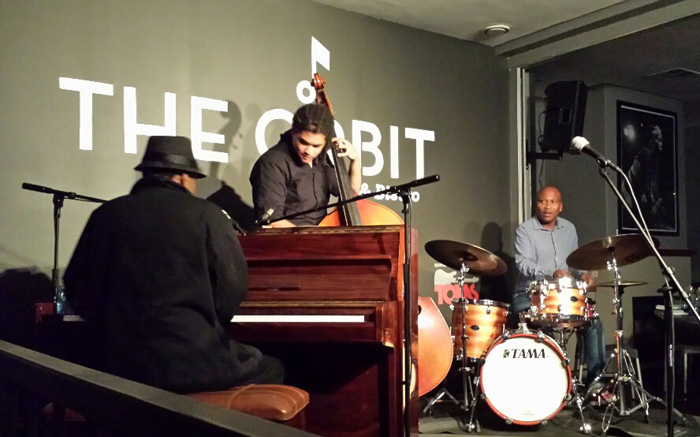 Ayanda Sikade was born in the year 1981 on the 1st of January, he’s the third born in the family of seven kids. Sikade got love of music at the tender age of seven by the time he was eight he had already started what was to be his long journey in music.At the age of ten Ayanda was a full time jazz band drummer which was called Vuka Jazz band from Mdantsane township in East London where he was born. In 1996 he attended the Grahamstown Youth Jazz Festival where he was selected to represent South African Youth Jazz i Sweden even though the trip never came to pass. He met Darius Brubeck in 1999 at the Grahamstown Youth Festival and Darius invited Ayanda to join the University of Natal jazz programme. Ayanda was again selected to represent South African students at IAJE(International Association for Jazz Educators)in Long Beach California US. In 2004 Ayanda won the prestigious Samro Overseas Scholarship which he just took recently (2009). Ayanda has worked with

the most accomplished jazz musicians in South Africa and abroad. Namely Feya Faku, Bheki Mseleku, Robbie Jansen, Barney Rachabane, Darius Brubeck just to name a few. Ayanda is currently working with the International acclaimed saxophonist Zm Ngqawana and has recorded two albums with him (Live in Basel Switzerland and Live in Heildiberg in Germany) please check Zimology Quartet Live in Basel on you tube. Ayanda has also worked with Simphiwe Dana and recorded a DvD that is called Siphiwe Dana Live at the Lyric Theatre in 2010.

Ayanda Sikade was invited to collaborate with Jan Galega a Swiss jazz maestro to play in a theatre piece that was written and directed by the only respected writer in Germany Mr Jorg Lure in Berlin in 2010 from June to July. Ayanda is busy mixing he’s debut album that he has recently recorded recently with the finest jazz musicians Herbie Tsoaeli Contrabass, Nduduzo Makhathini on piano, Mthunzi Mvubu on alto and soprano sax and Nhlanhla Mahlangu on Tenor and soprano sax. The album is to be released soon.

He is the drummer for Banz Oester and the The Rainmakers, which have released their New Album ‘Banz Oester and The Rinmakers Live @ Bird’s Eye Switzerland.