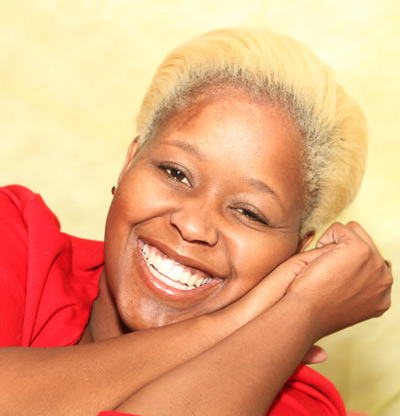 Ayanda Khumalo was born and raised in Johannesburg, to a musical and theatre dynasty. Her grandfather, Prof Khabi Mngoma, gave her her first musical lessons, teaching her music theory, violin and voice. Her parents, Sibongile and Siphiwe Khumalo are well known music and theatre practitioners.

From a very early age, it was clear that Ayanda would be active in the arts, especially music. In 1996, when she was just 11 years old, she was invited to be a part of an SAA sponsored trip of a 10-voice children’s choir, which travelled to London, UK, as part of President Nelson Mandela’s first official visit to that country. In 1997 she was invited by music producer, composer and bass player Victor Masondo to participate and feature in a recording in honour of President Nelson Mandela.

Ayanda studied drama at the National School of the Arts and matriculated in 2003. During her time there, she participated in school productions, both on stage as an actor, and behind the scenes as a stage manager. It was this interest in what happens behind the scenes that prompted her to study Management at the Cape Peninsula University of Technology (2005), where she was awarded the Principal’s Merit Prize for Excellence, as well as at the University of Johannesburg (2006-2008), where she was the soloist in the student choir.

Since 2008, Ayanda has worked as a tour and artist manager, garnering extensive experience along the way. She was the Company Manager for Sibongile Khumalo’s Reflect.Celebrate.Live -The University Tour in 2012.
A major accomplishment for Ayanda was when she was invited to be the Head of Headline Talent Management for the Opening and Closing Ceremonies of AFCON 2013, a task she acquitted with excellence and aplomb.

She has sung at various events including Isililo-A Mother’s Cry Campaign youth concert (2003), singing at Lebo Mashile’s book launch (2008), and at the opening of the Assylem Atelje Gallery in Newtown (2013). She was a guest performer at Sibongile Khumalo’s 20th Anniversary Concert at the Lyric Theatre in April 2012.
In 2013, Ayanda appeared at the Joy of Jazz Festival, and the East Comes Alive series at Birchwood Hotel, Boksburg

Ayanda has a deep love for Soul and Jazz music, and considers South African music her greatest inspiration and anchor. She works with a trio of young musicians who have helped her shape her sound.

From being a backstage baby, Ayanda has stepped out to take her place in front of the footlights, a most welcome development judging by the enthusiastic response of audiences wherever she has appeared.