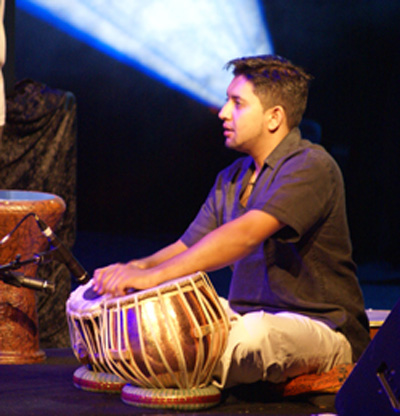 Ashish Joshi began his musical training under the capable guidance of the greatly respected South African teacher Jeram
Bhana. He underwent four years of training in the classical form of the art of percussion whilst he continued to play at religious gatherings for his spiritual group Rishi (Ramakrishna Institute of Spirituality and Hinduism). When he was 17, he teamed up with Marc Duby, Greg Hadjiyorki Georgiades and Priyesh Bhana to perform in the eastern world music project Avaaz.

Two years on, he formed the duo Strings and Skins and released an album of the same name. This duo went on to perform stunning concerts around southern Africa and did some remarkable collaborations with rap metal group Not My Dog, Tony Cox on his China album, as well as Madala Kunene and the DJ remix product Krushed and Sorted. Ashish has also accompanied various artists including Steve Newman, the late great bassist Gito Baloi, Neo Munyanga, Rob Watson and Barry van Zyl to name a few during his 16 years of performance. Ashish continued to dazzle audiences around southern Africa with his ever-growing percussive expression on the tabla, djembe, darbuka and dhol.

2006 and 2007 are busy years for Ashish featuring with Vivid Afrika who toured South Africa in 2006 and performed at the Cape Town International Jazz Festival 2007. Ashish is playing and recording with Greg Georgiades for their group Skins n’ Skinz but also playing with Madala Kunene Greg, Ernest Mothle and Bernard Mndaweni for DVD releases. In November 2006 Ashish gathered a group of young classical Indian trained musicians for a recording and filming of the project PRIVATE STASH.