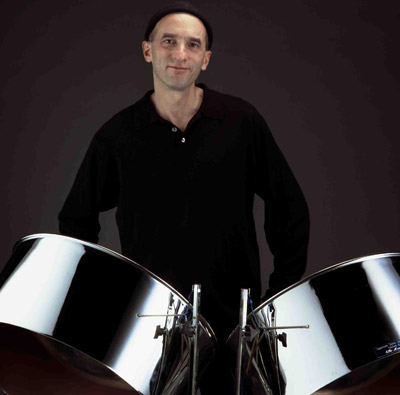 With his first solo album in 1979 Andy Narell took the steelpan out of the steelband and brought it into the jazz band, and with every album since, he has explored the possibilities and expanded the role of the pan in contemporary music.

In 1999 Andy became the first foreigner to compose for Trinidad’s Panorama steel band competition, guiding the 100 players Skiffle Bunch Steel Orchestra to the finals of both the 1999 and 2000 Panoramas. In 2007 he collaborated with Trinidad All Stars for a concert of his steelband music at the Trinidad and Tobago Steelpan and Jazz Festival. He has been an artist in residence at North Texas St. Univ., Wichita St. Univ., Univ. of West Virginia, Univ. of Akron, Univ. Of Illinois, Northern Illinois Univ., Miami Univ.(Ohio), Univ. Of Southern Mississippi, Eastern Kentucky Univ, Northwestern Univ., Texas Tech Univ., Univ. of Delaware, Univ. of Southern Mississippi, Calypsociaition (Paris), and many other schools.

Apart from his own recordings, he has worked as producer on many albums, including Billy Childs(4), Ray Obiedo(3), Kit Walker(2), Our Boys Steel Orchestra(2), Steve Erquiaga, The Bobs, Keith Terry and Crosspulse, Alex DeGrassi, Irene Farrera, Xoli Nkosi, and Prince Kupi.

Andy is the subject of a documentary film – ‘Andy and the Jumbies’, which features his work with Trinidad All Stars and Relator, as well as interviews with David Rudder, Ray Holman, Peter Minshall, Kim Johnson, and others. A second film – ‘Calypso Fever,’ documents his collaboration with the WDR Big Band – a concert of Narell’s music and classic calypsos featuring Relator, the 25 piece Andy Narell Steelband Project(from Paris), and the 14 horns of the WDR Big Band arranged by Michael Abene. These films along with live concert footage are scheduled for release on DVD in 2011