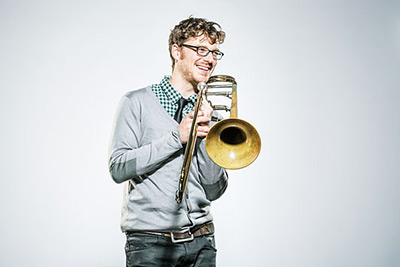 Zurich-born trombonist Andreas Tschopp returns to South Africa for a collaborative mini-tour with renowned bassist Carlo Mombelli and the Afrika Mkhize Big Band in Grahamstown and Johannesburg, and then participating in a countrywide tour and album launch as part of the Skyjack formation in September – all in the context also of a three-month residency facilitated by Pro Helvetia.
Tschopp is no stranger to collaborations with South African artists having collaborated with jazz talents such as Shane Cooper, Kesivan Naidoo and Kyle Shepherd in 2013. The four along with Swiss saxophonist Marc Stucki formed a quintet that has toured Switzerland and South Africa and will be releasing their joint album as the Skyjack formation in September.
A graduate of the Music Academy Basel, Tschopp started playing the trombone at the age of eleven and currently teaches trombone at Lucerne University of the Arts.