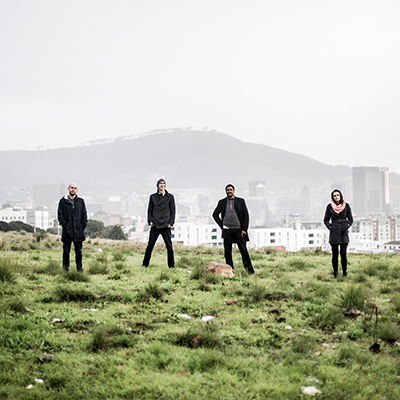 Norway’s Andreas Loven brings the spirit of District Six back to SA.

Jazz music has a tendency to be fleeting and ephemeral, but District Six, a new album from a quartet led by pianist Andreas Loven, is music captured in a happy moment which is now completely, and perhaps regrettably, gone for ever. – Sebastian Scotney, London Jazz News

The playing is superb. Each player is thoughtful and empathetic, constantly creating space for the others and the melodies to breathe, and that feeling of clear light and space, perhaps, provides the Northern accent in the music.
– music journalist Gwen Ansell

One land seen through the eyes of someone from a very different one is part of the enjoyment – African heat and dusty rhythm filtered through Scandinavian cool and reflection, you might say. And then there is just how good it sounds.
– Peter Bacon on The Jazz Breakfast

Norway and South Africa are two vastly different countries. The one, way up North, has GDP per capita of $89,741 and sparks images of strong Vikings, and majestic fjords. The other, down South, is a third-world country with a GDP of $7,575 that brings to mind the mighty Zulu warriors, the horrors of apartheid and the triumph of a new beginning and the rise of a progressive, inspirational Constitution.

Yet when two vastly different nations combine their souls in the potpourri that is jazz, the sounds that are created are magic.

Norwegian pianist Andreas Loven has manage to merge the influences of Nordic folk and lyricism with the ancient sounds and rhythms of Africa. It’s probably why the name of his second album is so apt. Drawing on the influences of the multi-cultural, colourful area of Cape Town, District Six, Loven and his South African bandmates have produced an album that has wowed the harshest of critics.

Loven, who worked as an engineer until, at 23, was drawn to music full-time after a family tragedy. The part-time pianist was mentored by Norwegian jazz musician Tord Gustavsen, and in 2007 moved to Cape Town, where he studied jazz at the University of Cape Town’s South African College of Music. Loven’s exposure to African rhythms and harmonies crept into his soul. A particularly important influence has been saxophonist Buddy Wells, who has become a close friend. Loven says that Buddy’s excitement, feedback and commitment has been fundamental to develop his musical direction.

2015 was a breakthrough year for Loven. He released his debut album, Nangijala (a fantasy land that features in Astrid Lindgren’s The Brothers Lionheart), to international critical acclaim. A few months later, he recorded a follow up album at Milestone Studios (Cape Town), with an extended ensemble, featuring Romy Brauteseth on double bass, Buddy Wells on tenor saxophone and Clement Benny on drums.

Just weeks after recording District Six, Loven returned to Norway for family reasons. His South African affection and ties remains very strong, evident for anyone that explores his music.

Loven used to pass the District Six area regularly while living in Cape Town. Upset by the apartheid power abuse, he eventually decided to try give his daily anger a break, and rather imagine the life and creative spirit of the community.

“It really connected with my own story. The people there were inspired by their diversity and used it to create something good – exactly what I am trying to do with my music,” he said.

In turn, practicing this new mind set put Loven on a compositional direction, which resulted in the music on the District Six album, released February this year.

Next weekend, October 7 and 8, Joburg’s premier jazz venue, the Orbit, plays host to Loven as part of the South African tour related to the launch of District Six.

“Both South Africa and Norway equally feels like home. I’m stoked to come back for a while, to perform and spend time with friends,” said Loven.
“The Joburg gigs will be followed by a trip back to my old stomping ground in Cape Town, and it’s going to be awesome to get back to the music scene there.”

Catch Andreas Loven, Buddy Wells, Romy Bauteseth and Spha Mdlalose and Marlon Witboi at The Orbit, at 81 De Korte Street, Johannesburg, on October 7 and 8 at 8.30pm. Tickets are R180.