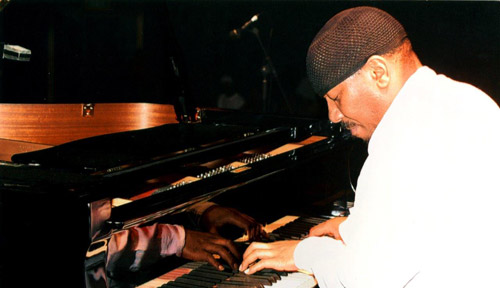 During 1993 – 1997 Andile toured and travelled to the USA, whilst there did workshops and delivered talks at the North Western University in Chicago on Jazz, the Arts and the Political Landscape of South Africa.

Then in 1996, he travelled to Norway as part of a Cultural Exchange and recorded with Zim Ngqwana and Norwegian Musician and Leader of the Project Bjorn Ole Solberg. To solidify the relationship, an album was recorded in Norway – The SAN Song (South African – Norway Project. Andile returned to Norwayin 2002 to record Zim Ngqawana’s debut album Zimology at the Rainbow studios in Oslo.

In 1998 Andile toured England with Zim and British musicians led by the legendary Keith Tippet and also played at the Royal Albert Hall in London, and during that same year was part of a South Africa / France Cultural Exchange project with special attention to Johannesburg and NATES

This relationship between Andile and Zim Ngqawan’s, saw these two Artists tour Europe, the USA and South Africa and 5 [five] albums was recorded during this period where Andile was part of Zim’s rhythm section.

The last international performance Andile had with Zim Ngqawana, was in 2006 where they performed a duet in Paris at Citi de la Musique (Lavevillette)

Other than working with Zim and VOICE, Andile also worked as Session Musician, Producer, Arranger and Pianist.

Mr Yenana has Lectured Jazz Theory, Piano first Instrument and Ensemble – 1-4 at Venda University from 2006 – 2007, He has worked as Researcher / talent scout for Gospel Star Search, and Worked on 2 seasons of SABC 2 music show LILIZELA as Music Director / Head Researcher/Producer of all the programmes live signature music . He has also wrote, recorded the score for documentary lighted on eTV – The Road to Xua . Did the ‘Shouting Silent Documentary, produced by Xoliswa Sithole . Andile featured on piano in the Documentary (Jazz Fantasia – The Music of Gideon Nxumalo by Film Maker Glen Masukwana .

Andile recorded two albums: We Used to Dance (2003) and Who’s got the Map? (2005) which he performed Nationally at various jazz venues.

In 2008, Andile received funding from NAC/MINNO to do a series of workshops, Research and Development brass Ensamble lessons and performances in the Eastern Cape with township/rural youth of the Eastern Cape

Andile continues to perform throughout South Africa, working with different Ensembles, Mentoring young students, preparing them for Auditions to international Universities e.g. Berkley University and giving Private lessons in Jazz and Piano. Andile Yenana is a Member of SAMRO and is the PRINCIPAL JAZZ PIANIST at the Afrikan Freedom Station in Johannesburg.