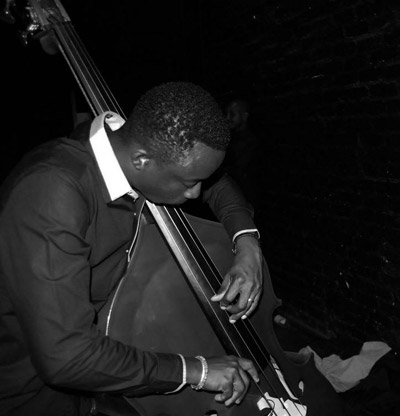 Amaeshi, Okwarachukwu Ikechi (popularly known as Amaeshi) is a Nigerian bassist and composer born to a Christian family of four children, being the youngest member of the family. His siblings were actively involved in church music so it wasn’t strange for him to have picked up an interest in music. But it became more evident that it was more than just an interest when almost everything around him became a musical instrument and he would soon start to lobby his way into the church band and become a part of the school band and various cultural groups as a percussionist.
At the age of 13, he got the opportunity to see for the first time western musical instruments such as the piano, bass, guitar and drums in a local church and that aroused his curiosity. Unfortunately, he didn’t qualify for the church scholarship to learn one of the instruments because he was relatively younger to the other children. Most of the kids opted to learn instruments other than the bass guitar and this caught his attention and that was the beginning of the quest for the knowledge of the instrument. With the help of friends who could share their little knowledge about the bass guitar, he started figuring it out on his own. The story is endless from this point, but it was surely a young man’s quest after his “inner soul and fulfillment”. His bass guitar influences internationally are John Patittucci, Jaco Pastorius, Richard Bona, and Tom Kennedy.

His first professional experience with music was when he joined the African Lagidos (led by Daniel Bankole), which was made up of young musicians from the same town where he grew up. They started touring lots of the restaurants in Lagos, Nigeria and recorded an album. Shortly after, he started working with the legendary Duro Ikujenyo (Egypt 80 keyboardist) with whom he toured the country and also recorded an album.

Ever seeking new challenges to take his gift further than just regional success, in 2007 Amaeshi relocated to the Republic of South Africa and has since been touring the continent of Africa, sharing his passion. He remains the second Nigerian to ever work with the legendary “MAMA AFRICA”, late Miriam Makeba. Among his musical accomplishments, he has performed and recorded with Selaelo Selota, Lira, Simphiwe Dana, Zama Jobe, Stix Hojeng, Malaika, Sibongile khumalo, Zonke, Lulu, Mimi, Zim Ngnawane, Ternielle Nelson, Jolanta Durno, Della Tamin, Kunle Ayo, and Olufemi.

The advertising industry has also tapped into this bundle of talent as he is presently in The Outsurance infomercial which runs through 2012. He seeks to use music as an instrument of peace, healing, and unification which inspires his passionate approach to music and a respect for the art form.