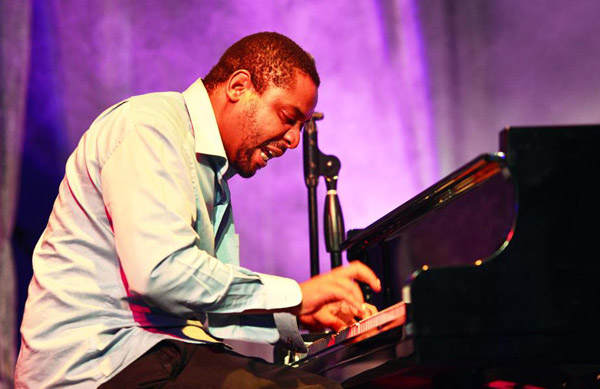 Mkhize, started playing the piano at the age of six.

“I was surrounded by music at birth and never stopped loving it,” said Mkhize about his journey into jazz. “To win this award simply means that some individuals have been watching me for a number of years. This also means that there is appreciation for my work. My expectation is to continue working with confidence, since I now know that there is positive support,” he added.

At age 11, Mkhize was enrolled at the Funda Centre Music School in Soweto to study classical piano. At only 15, he was accepted at the National School of the Arts to further his classical musical studies, and in 1999, he enrolled at Pretoria Technikon to further his interest in Jazz, Composition and Arranging.

“Afrika Mkhize represents the exciting new face of South African jazz,” said Alan Webster, National Arts Festival committee member for Jazz. “Steeped in South Africa’s musical heritage, he displays a fresh, international perspective that places South African jazz in a new perspective. He is a pianist with serious jazz chops who has the versatility to play music from across the spectrum, from African grooves to hip-hop to straight-ahead jazz, and in any company,” Webster added.

During his school years, Mkhize was involved in arranging music for small ensembles and performing live with musicians in the Johannesburg jazz circuit. After completing his studies, Mkhize began working as a music producer, producing award-winning albums for Tlali Makhene, Themba Mkhize, Sibongile Khumalo, Kabelo from TKZ, Nokukhanya Dlamini and Miriam Makeba.

In 2010 Mkhize arranged music for the Johannesburg Philharmonic Harmonic Orchestra featuring Abigail Kubeka, Dorothy Masuka, Mara Louw and Zenzi Lee, for a tribute to women in the arts at the State Theatre, hosted by the Department of Arts and Culture.

In November 2010, he scored arrangements for the Jazz Meets Symphony Orchestra, conducted by Prince Lengoasa. He is currently scoring full Big Band Arrangements for his favourite pianist, the late Bheki Mseleku, in his honour.

“One of the ways of understanding a nation and its culture is through music. This means that Standard Bank should continue developing and nurturing young artists as this makes our heritage and culture much richer and able to uplift the human spirit. I wish that other individuals or entities could follow the same example as Standard Bank,” said Mkhize. “Over the years the SBYAA has chosen the most talented, skilled and hard working musicians to be the recipients of this award. Some of the recent winners are close friends of mine, and it makes me feel honoured to be in the company of the previous winners.”

The Young Artist Awards were started in 1981 by the National Arts Festival to acknowledge emerging, relatively young South African artists who have displayed an outstanding talent in their artistic endeavours. These prestigious awards are presented annually to deserving artists in different disciplines, affording them national exposure and acclaim. Standard Bank took over the sponsorship of the awards in 1984 and presented Young Artist Awards in all the major arts disciplines over their 28-year sponsorship, as well as posthumous and special recognition awards. The winners feature on the main programme of the National Arts Festival, Grahamstown and receive financial support for their Festival participation, as well as a cash prize.

The 2012 National Arts Festival runs from June 28 to July 8. For more information, click on the banner advert at the top of this page which links to the NAF site.