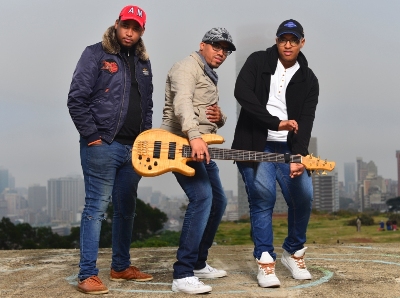 Prince Bulo (acoustic/electricbass), Prince Bulo is a versatile bassist and Composer who derives his musical style from a diverse range of influences. His love for music became evident at the age of 15 when he began learning the piano at church, whilst also juggling a promising soccer career. Due to a sporting injury he spent more time playing and making music which led him to naturally hanging his boots for the love of music. Prince graduated ‘cum laude’ in Jazz Composition, Arranging and Performance from the University of KwaZulu-Natal. He has produced and performed with artists like Sibongile Khumalo, Asanda Bam, Natalie Rungan, Mageshen Naidoo, Neil Gonsalves, McCoy Mrubata, Swazi Dlamini, Ernie B St Claire, Nicky Schrire and Bokani Dyer. He performed with international artists like The North Sea Big Band, Eric Arellano (USA), Mette Eker, Jeroen van Vliet, Toumas Turenen, David Back (Sweden), Mike Ruby (Canada) and shared the stage with leading jazz musicians such as Branford Marsalis, Joshua Redman, Esparanza Spalding, Todd Gustafson, Phil Perry, Jeff Lober, Jimmy Haslip, Will Kennedy, Alexander O’Neal and Frank McComb.

Sphelelo Mazibuko was born in Newcastle, Northern region of KwaZulu Natal in South Africa. He was born into a family with generations of musical tradition. With his Grandmother being a singer, his father a singer and guitarist and his siblings also musicians, the musical heritage became second nature to Sphelelo and he was inevitably destined to respond to the passion of music in a big way.

At the age of 14 he began to learn playing Drums unsupervised, mainly in church. His hunger for growth in music led him to pursue formal studies towards a BA in Music and Media studies at the University of KwaZulu-Natal in 2009 and he graduated in 2013.
Mazibuko studied music under the guidance of respected Jazz Educator, Neil Gonsalves.

He was born in Port Shepstone, a small town down south of KwaZulu-Natal. He comes from a background of no formal musical training but had a keyboard at home to try and figure out how to play. He then taught himself how to play keyboard throughout high school.
In 2011 he joined University of KwaZulu-Natal for a Diploma in Jazz and Popular Music. He completed the diploma in Jazz Performance 2014, currently doing Bachelor of Music majoring in Arranging and Composition. In 2012 and 2013 he was selected to be part of University exchange program with University of Virginia (USA). Lungelo was selected to be part of the Standard Bank National Youth Jazz Band under the supervision of the legendary pianist Paul Hanmer, which toured Sweden that year as well (2012). He headed back to Virginia Richmond (USA) in as a Piano Player, Composer and Arranger to the Virginia Commonwealth University.
Lungelo has recorded and toured with various artists, namely, Tshepo Mngoma Jazz Violinist and recorded artist, Award winning song bird Judith Sephuma, Idols Season 8  winner and Metro Award winner Khaya Mthethwa, Actor and International Singer Brian Themba, Gospel Award winning couple Ntokozo and Nqubeko Mbatha, Sosha Oshaye (USA), Afro ethnic singer Brenda Mntambo, Award winning singer and Idols Season 6 runner up Lloyd Cele, South Africa’s great gospel choir Joyous Celebration  and a lot of other well accomplish artists.

He has also worked on various TV productions such as I want to Sing Gospel Season 3, X factor South Africa 2014, Clash of the Choirs 2015, 14th and 15th Metro FM Awards to name a few.