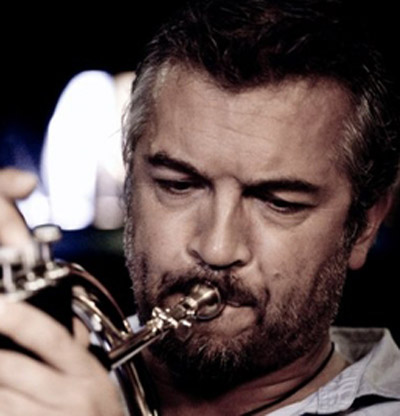 Never mind that he’s from South Africa. Trumpeter Marcus Wyatt has decided to voyage through space. You can accept whatever double entendre the phrase might suggest, but the point is that the trumpeter and composer takes his group into uncharted territory. After a brief devotional horn introduction on the opening track, “In The Beginning,” the group ascends into the deepest, darkest realms occupied by John Coltrane at his most spiritual. In some sense, Wyatt has signalled that he too is headed into Interstellar Space.

But after that prelude, the band turns the page, erupting into a funky up-tempo swing. The chorus is clearly arranged, fully involving the sextet. “In the Beginning” makes a gleeful transition among styles and begins to explore Wyatt’s composition—based on tight group interplay which supports energetic solos from pianist Mark Fransman and Wyatt. The arranged horn sections down the road have just enough looseness to render them flexible, but they stay true to the melody of the tune. Some interesting group improvisation here and there recalls early lessons from free jazz.
Further along, the group enters into the first of four pieces devoted to Zacks Nkosi. A brief paced, somber flugelhorn/piano duet introduction on “Part I” leads directly into “Part II,” which has a distinctly South African feel. While transposition and harmonic detail may color the changes, they retain the distinctive three-chord unit that forms the basis of mbaqanga and its predecessors dating back decades. As the group segues from an up-tempo swing into R&B-flavored grooves and back, its travels seem natural and unforced.
Vocalist Nontuthuzelo Pouane joins the group on four tracks (two backed by Tyner-influenced pianist Andile Yenana), and her performance relies on an distinctly instrumental approach. She joins in unison lines, harmonizes with the horns, and sails free on warm melodies—all the time spurring the group onward into fresh energy. Her take home message from “You Were There”: “If you listen hard enough, you’ll know why you’re here.” Indeed.
Two characteristics of Africans In Space make it special. First, Wyatt has a real knack for combining disparate styles in his compositions. For the most part, the foundations lie in straight-ahead, swinging jazz. But the record wanders all over the stylistic map—often within each piece—without losing its spontaneous, organic feel. Second, Wyatt’s group relies on just the right combination of coordination and restless energy. The band’s collective balancing act helps tie things together without ever really locking them in. And that’s where Africans In Space derives its greatest excitement. You can come back to earth when it’s all over.