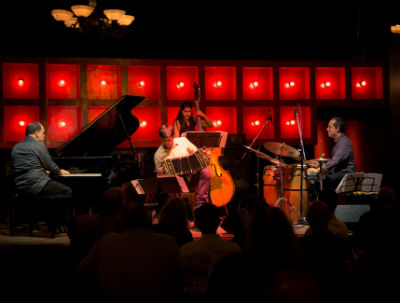 Adrian Iaies is an Argentinian pianist, composer, arranger & producer.  He has a career stretching back more than 30 years, has released 25 albums as a band leader and performed more than 300 concerts all over the world.  Iaies’ work was most recently recognised by the prestigious magazine Down Beat which named him on a 2017 list of Best Jazz Composers.

He has played at festivals and top stages around the world as a solo pianist, with his trio and in other formations. Notable performances include the Lincoln Centre of New York, the San Sebastián Festival in Mexico, the Oslo World Music Festival, the jazz festivals of Madrid and Barcelona, the Vancouver Festival and the Metropolitan Opera of Tel Aviv.

His work was the subject of a documentary, Loco Bohemia, cinco días con Adrián Iaies (Crazy Bohemia, five days with Adrián Iaies), by renowned filmmaker Rafael Filipelli.  The film, released in 2014, delves into the exploration done by Iaies in search of a jazz language for the more traditional tango repertoire.

He is the artistic director of SJAZZ, a sub-label under EMI ODEON, with the express purpose of producing and promoting albums by Argentinian jazz musicians.

Alongside his prolific musical career, he has since 2008 held the position of Artistic Director of the Buenos Aires Jazz Festival, and is now also the director of La Usina del Arte, one of the top cultural centres in Buenos Aires.

He began teaching in 1985 and has taught piano, harmony, composition, orchestration and improvisation in classes, workshops and masterclasses all over the world. He recently taught a class as part of the international postgraduate in Cultural Administration and management at the University of Córdoba.

He plays as a solo pianist, with his Trio and now with his new formation, the Colegiales Quartet.