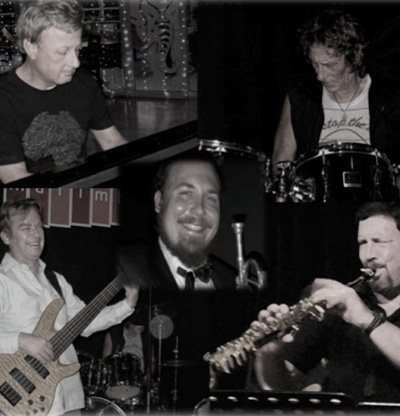 David Bass (piano) studied classical piano until his big brothers led him astray with an endless supply of rock and roll and jazz vinyl. As a consequence, his piano style pitches somewhere between Keith Jarrett and Deep Purple. He formed his first band whilst studying medicine at UCT, teaching himself to compose, arrange for brass and woodwinds, and perform an (almost) bloodless appendicectomy. Over a lifetime of balancing music with his medical career, he has worked with many of South Africa’s most notorious musicians (and surgeons). He has collaborated on various projects with Marc Duby and Alan Thwaites since 1975. He spotted Mike Rossi in Grahamstown in 2001 and an idea was born…

Marc Duby (bass) studied music at the Universities of Cape Town and Kwa-zulu-Natal, and was awarded the first masters’ degree in jazz performance (cum laude) in Durban 1987. He was appointed as the first director of the Standard Bank National Youth Jazz Band (2001) and completed his PhD thesis in 2006 on Soundpainting. In four decades as professional bassist, Marc Duby has worked with many iconic figures of South African music including Barney Rachabane, Nelson Magwaza, Philip Tabane, Winston Mankunku Ngozi, John Fourie, Bruce Cassidy, Darius Brubeck, the Kalahari Surfers, as well as renowned international artists on 3 continents. A prize-winning composer of film music, he is active as a performer, composer/arranger, and music educator, and currently serves as Professor of Musicology at the University of South Africa.
Mike Rossi (Woodwinds) was born, raised and educated in The USA, and was lured to Durban by his long-time friend Darius Brubeck. Mike is currently Professor in Jazz and Woodwinds at the South African College of Music, University of Cape Town. He regularly performs at local and international jazz festivals and conducts workshops and master-classes in Africa, Europe and the United States. He has published 3 books and a number of original compositions arranged for mixed ensemble. He is a frequent collaborator with Brubeck and they have recorded 3 CD’s together. As leader of the Mike Rossi Project, he recently released a second CD of his own original compositions entitled “Trespassing Permitted”.

Alan Thwaites (drums) has been a drummer since the age of 12, boasting a career of 50 years. Over that time, he has counted in for scores of musicians across the length and breadth of South Africa, spanning a wide spectrum of tastes and styles. He lives in Cape Town where he holds a part-time appointment teaching drums and percussion to high-school students.