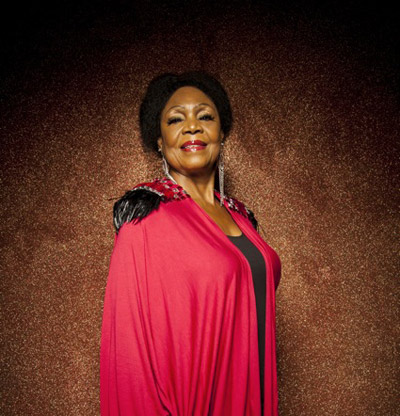 Abigail Kubeka (born 1941) is a South African singer, songwriter, musical arranger and actress who is known primarily for her musical performances, especially in cabaret.

Kubeka was born in 1941 in Orlando East, Soweto’s first formal township. Her mother washed clothes for a living and her father worked in a warehouse. Kubeka attended a missionary boarding school in Kilnerton, near Pretoria. At an early age, Khubeka displayed her talent for singing at school.

Sophiatown in the 1950s, where Kubeka spent her teens, was a pressure cooker of dynamic cultural development. Music and especially indigenous jazz had taken root in the community in a manner unprecedented in South Africa.

This was the cultural ethos from which Kubeka was to emerge as an artist and performer, as one of the youngest of the legendary artists who helped define the contours of South African musical and cultural identity in the 1950s.

Kubeka’s career started in 1957 when, at the age of 16, Miriam Makeba, having taken notice of her talent, invited her to join her Skylarks ensemble, which at that time also comprised the legendary Letta Mbulu and Mary Rabotaba.

The Skylarks, together with other groups such as the Jazz Maniacs evolved and promoted
the marabi and mbaqanga styles of music. Kubeka went on to understudy the legendary Makeba in the famous international jazz opera King Kong, which went on to tour Europe successfully.

In the 1960s, Kubeka accompanied musical giants Abdullah Ibrahim (then Dollar Brand) and Kippie Moeketsi in cabaret performances in the nightclubs of Hillbrow.

She performed to critical acclaim across venues in Africa, Europe and Asia, appearing alongside such stars as Eartha Kitt, Percy Sledge and Monk Montgomery.

Kubeka also developed a career as an acclaimed actress in film, television and on stage. She featured in the films Hijack and The Line. Her stage roles include Des and Dawn Lindberg’s King Afrika with Henry Cele and Best Little Whorehouse in Texas with Judy Page.

In Xoli Norman’s Our Father, Ma’s got the Blues, Amen she played shebeen queen Joyce, a role which allowed her to give free voice to her love of the blues. In a performance in the documentary Sophiatown, together with Thandi Klaasen, Hugh Masekela, Dorothy Masuka, Jonas Gwangwa, Caiphus Semenya and Dolly Rathebe, Kubeka paid tribute to the indigenous jazz music of the 1950s.

She also recorded an updated version of Yini Madoda, a song first recorded by the Skylarks almost four decades earlier. The popular song captures the unbroken spirit of rural women left behind and often neglected by their men who are forced to seek work in the cities.

Kubeka writes and arranges many of her own songs. She contributed the theme song for the sequel to the well-known documentary film What Happened to Mbuyisa?.

Kubeka has commanded huge world audiences, such as at the first Miss World Pageant to be held in South Africa in 1992 and at the opening ceremony of the All Africa Games in 1999. She has also performed for more intimate audiences, including former president Nelson Mandela and Queen Elizabeth II.

Kubeka sings in many South African languages, including Afrikaans.

Kubeka has made a major contribution to the evolution of South African music genres, and following the destruction of Sophiatown, to keeping these musical traditions alive so that a free and democratic South Africa may enjoy its cultural and especially musical legacy.

Today, Kubeka continues to enthrall ever-devoted audiences through song and performances on stage, in film, television and cabaret. She was the recipient of the Woman of our Time Award in 1986.

Abigail was the winner of the Lifetime Achievement Award at the 8th annual South African Film and Television (SAFTA) awards, in 2014