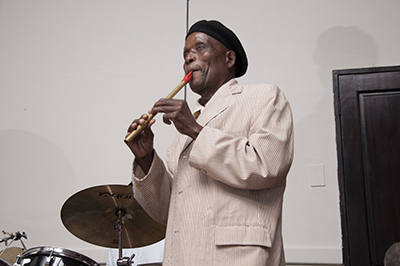 Abbey Cindi was born on the 15th October 1938 into a family of musicians including his father, a tap dancer, conductor, and singer, who inspired Abbey mostly.

During his high school years, Abbey Cindi went on his own learning and mastering the flute, harmonica, and pennywhistle, as well as singing. Members were always disappearing in the group, leaving him with Phillip Tabane. They diverted from American Jazz to African indigenous, and more soulful, music. The only person they would allow in their work shop was their friend, Julian Bahula, who they then decided to put him on African drums. The band of three was called Malombo Jazzmen. Malombo means “spirit” in Tshivenda language.

A few months later in 1964, the band took Orlando Stadium by storm during the Castle Lager Jazz Festival, where they won first prize. Unfortunately, due to their youthfulness and lack of management, the band split up in the same year.

After the split of Malombo Jazzmen Cindi recruited guitarist, Lucky Ranku. They were later joined by Bahula, and so forming the Malombo Jazzmakers in 1966. Cindi wrote and arranged all the songs for the band. The band produced an instant hit, and recorded three albums with
Galo Records.

In 1967 Cindi and Bahula organised the first ever jazz festival by
black South Africans at Mamelodi Stadium. At the same time, they introduced the payment of musicians for performing and
not competing any more.

In 1971, Malombo Jazzmakers participated in an Afrika Day rally in Durban that was organised by the South African Students Organization (SASO), under the leadership of Steve Biko. On their return to Pretoria, police were waiting to collect Cindi, as the leader of the band, for questioning. They became regular visitors at Cindi’s home, and eventually confiscated his passport after he made false statements, and disagreed with their proposal. As a result, the band was unable to go on its American tour in 1977. Instead, Bahula was allowed to leave South Africa with a band of white musicians (HWCK) so he could make a way for Cindi and Ranku to go to London.

While without his passport, Cindi travelled to Durban where he found himself involved with the people in the struggle. They moved around universities and high schools presenting music and poetry programmes. Sometimes Lefifi Tladi would travel to Durban from Pretoria with his band Dashiki before they skipped the country.

In 1975 Cindi started a new band, and called it Afrika in
defiance. He continued with the music and poetry at high schools
and universities. In 1982 I got an offer to perform at the Royal Academy International Jazz Festival in London. His passport was released by public demand in 1983. Cindi was, again, invited to the Brecknell Jazz Festival in London.

In 1985 he recorded and album about the mines migration workers titled January to December Emgodini. It was soon banned after three weeks of air play by the SABC.

In 2007 Cindi recorded an album with full information and more significance about the African renaissance concept, and dedicated the album to all South Africans who participated in the country’s struggle for freedom. The album is called United States of Afrika featuring McCoy Mrubatha and Bheki Khoza.