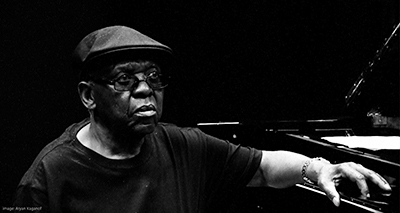 Bra Tete has performed and recorded with many of the giants of South African jazz (Johnny Dyani, Lulu Gontsana, Dick Khoza, Early Mabuza, Duku Makasi, Nik Moyake, Ezra Ngcukana, Winston Mankunku, Dennis Mpale, Dudu Pukwana, et al), and is one of the few musicians to have played with all three generations of South African jazz artists of the last fifty years. He featured in Pascale Lamche’s 2003 movie ‘Sophiatown’, and his compositions have been recorded by The Blue Notes, Chris McGregor, The Soul Jazzmen, McCoy Mrubata, Brian Thusi and Adam Glasser.

His work as a pianist, vocalist, composer and arranger can also be found in many anthologies of South African jazz. His instantly identifiable ability to combine mbaqanga and contemporary jazz harmony de ned his classic 1976 album ‘Tete’s Big Sound,’ and this musical signature remains clear to those with an ear for harmonic sophistication and rhythmic drive. Reviewing his 2012 solo album ‘Black Heroes’ Gwen Ansell (author of ‘Soweto Blues’) noted that ‘if you are seeking heroes, Mbambisa not only wrote about them, he also lived the life.’